Cars
RV Rentals
Loading...
Find the Cheapest Car Rental in Chicago by Comparing Deals
Download the VroomVroomVroom app and access the best car hire deals wherever you are.

Find the Cheapest Car Rental in Chicago by Comparing Deals

"The City of Big Shoulders" may sound intimidating, but renting a car to get around the celebrated city of Chicago is easy when you book your car rental using VroomVroomVroom. We compare deals from trusted brands such as Alamo, Avis, Budget, Enterprise, Hertz and National. Start comparing to find the perfect rental car for your next trip!

Chicago has numerous nicknames, which reflect the impressions and opinions about historical and contemporary Chicago. The best known include: "Chi-town," "the Windy City," "Second City," and the "City of Big Shoulders." It has also been called "the most American of big cities." The city's notoriety expressed in popular culture is found in novels, plays, movies, songs, various types of journals (for example, sports, entertainment, business, trade, and academic), and the news media.

Reasons to book a rental car through VroomVroomVroom

The peak season in Chicago is summer, which is also the festival season, so you can expect the months of June, July, August and September to be crowded. If you want to avoid the crowd and still take advantage of the warm weather, travel to Chicago from April to May or from September to October. If you don't mind the cold weather, the best time to grab great deals on airfare and hotels is between November and March.

Public transportation is popular in this huge Midwestern city, but you can't beat the comfort and convenience of having your own car to get out there and explore! Driving in Chicago will be a breeze if you know the traffic situation in certain areas so check it using Waze or Google Traffic. The best time to drive through Chicago is between 3 am and 5 am so you can avoid the rush hour which runs from 7 am until 10 am. In the afternoon, make sure to leave before 4 pm since that is the start of the peak hour which lasts until 7:30 pm. Click here for more useful driving tips in Chicago.

Where should you go in your rental car in Chicago?

Located along the southwestern shore of Lake Michigan, Chicago is regarded as one of the most influential cities in the world. It is a major center for culture, politics, education and industry as well as medicine and higher education. Here are a few things not to be missed if you visit Chicago. 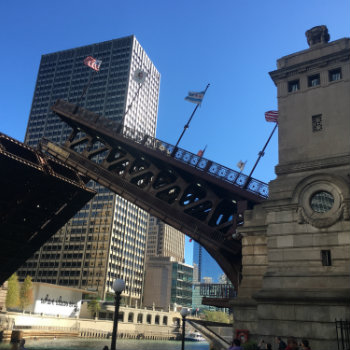 The historic bridgehouse will take you back in time and give you a better understanding of the relationship between the city of Chicago and its river. The McCormick Bridgehouse & Chicago River Museum welcomes tens of thousands of visitors annually. It features exhibits that celebrate the famous Chicago River and its iconic bridges. The best time to visit is during spring and fall where you can witness the museum's moving gears lift the Michigan Avenue bridge leaf. The museum is only open from May through October so make sure to check their website for exact times.

Originally built 1916 as a cargo facility for freightliners, the pier was renovated in the '90s as a public gathering place which features a 150-foot Ferris wheel, artwork, restaurants, gardens and parks as well as a variety of shops. Getting here is quite easy and finding a parking space is not a problem as well. The East and West indoor parking garages, which can accommodate up to 1,500 vehicles, can be accessed via Illinois Street and Lake Shore Drive.

The Art Institute of Chicago

This is is probably the most popular and famous Chicago cultural attraction. This great museum includes a world-class art collection, excellent exhibits (both permanent and special), and has one of the most famous entrances in the country: the two bronze lions that guard its entrance.

Formerly known as the Sears Tower Skydeck, this famous landmark is where you and your family or friends will be captivated by the panoramic views from the Western Hemisphere's tallest building. Imagine seeing four states without leaving your spot and not to mention awesome views of Lake Michigan and more amazing scenery.
Back to Top

5 Things You Must Do in Chicago

1. Watch a professional sporting event. Whatever sport you fancy, they probably play it in Chicago. The city is home to two major league baseball teams and one NFL football team as well as two professional hockey teams, both indoor and outdoor soccer and lacrosse leagues, as well as a women's roller derby team.

2. Enjoy art at the Chicago Cultural Center. Once the city's library, this Chicago landmark now houses exhibitions of performing, visual and literary arts. The building also serves as the reception spot where the city mayor has welcomed Presidents, royalty and community leaders. For more information on the Chicago Cultural Center click on the link.

3. See a Broadway musical brought to the city courtesy of Broadway in Chicago. Broadway plays that have come to Chicago in the past include Cats, Chicago and Stomp.

4. Eat a Chicago style hot dog or deep dish pizza. They say these foods taste better in Chicago than in any other city in the world.

5. Experience Gibsons. World Famous and inventor of the "Gibson's Martini," this is a steak eating extravaganza. It's not cheap but the well aged, marbled porterhouses are about 4 inches high. Dig in! Click n the link to read more about Gibsons.