Cars
RV Rentals
Loading...
Find and Compare Reliable and Affordable Car Rental in Cape Canaveral
Download the VroomVroomVroom app and access the best car hire deals wherever you are.

VroomVroomVroom has all the info that you want to help book a great deal on a rental! Cape Canaveral is a Florida city famous for its connection to space exploration, located in the middle of the state's Atlantic Ocean coast.

If you need a car rental when visiting Cape Canaveral, you can quickly and easily find the best rates on rental vehicles at our site! We can provide you with all the types of vehicles you might want, and give you price comparison info so that you can make your decision based on what you want to drive and how much you're willing to spend!

Reasons to book a reliable rental car in Cape Canaveral

Your affordable car rental will allow you to explore all of Cape Canaveral's attractions. Drive over to the Kennedy Space Center Visitor Complex. This famous educational museum and science center is extremely popular with children and adults who remember the manned space missions to the moon! (You can even book online!) Or you might choose to drive your car rental to Jetty Park, for a nice walk on the beach with your sweetheart.

The U.S. Air Force Space and Missile Museum is another cool local attraction, and it's well worth an afternoon visit if you find yourself looking for a place to go in your car rental. Or for those who prefer to do their sightseeing at less “official” museums, please consider taking your rental car for a visit to the Rocket Garden in Cape Canaveral – it features eight breathtaking vintage rockets used during the Mercury, Gemini, and Apollo space missions!

If there's any problem or you need some assistance in booking a car rental in Cape Canavera, make sure to contact us either via phone call, email or live chat.

Five Things You Must Do While You Are in Cape Canaveral

Cape Canaveral (population 8,900) is 117 miles east of Tampa in northern Florida. The city is on an island, separated by the Banana River from Kennedy Space Center, the site of the first launches of the U.S. space program in the late 1950s, as well as all subsequent ones. The center provides nearly all of the jobs and tourist interest, but Cape Canaveral's nearby beaches are also a major attraction. 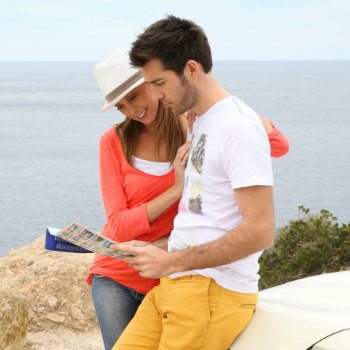 1. Kennedy Space Center: Kennedy Space Center: NASA conducts all of the U.S. space program launches from this vast facility. The center's visitor center includes a full-size, walk-through replica of a shuttle; full-size and scale models of U.S. and Soviet spacecraft; and an IMAX theater. Tour buses with recorded narration circle the vast complex.

2 . Space Launch: View a space launch: Cape Canaveral is closed to the public during launches for security and safety reasons. But you can reserve a seat on a bus that goes to NASA's official six-mile viewing site of Launch Complex 39 up to seven days before liftoff. You can also get a free car pass by mail to watch a launch from within Kennedy Space Center.

3.  Merritt National Wildlife Refuge: This seaside refuge is notable because it contains within its mangrove swamps, marshes, and hardwood hammocks more threatened and endangered species than any other refuge in the continental U.S. It is one of the best birding spots in the country in the fall and spring because it is under the Atlantic Flyway migration route. Three trails include a 12-foot bird-watching platform.

4 . Canaveral National Seashore: This 25 miles of windswept beach is a favorite haunt of surfers, camping families, and nature lovers. Families enjoy swimming in the calm waters of Apollo Beach, while 12-mile, wild Klondike Beach offers top-notch wildlife viewing and bicycling on its hard sand. You can rent canoes and kayaks here to paddle to the Merritt Refuge. Remains of a Timucuan Indian village are being excavated at Turtle Mound Archaeological site.

5 . Spot an endangered species: At Klondike Beach, crews of conservationists and National Park Service rangers patrol at night, screening the nests of loggerhead, leatherback, and green sea turtles. In June and July, a guide from the Turtle Watch Program leads visitors on nighttime walks to possibly observe a female terrapin dig her hole, lay eggs, then return to the sea.