What's Big and Orange and the Pride of Ohakune? 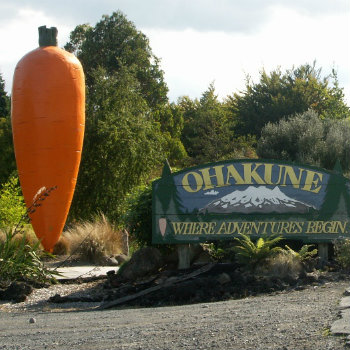 At 7.5 metres tall, this Big Thing To See in the World is a very large model of the tasty orange vegetable, and has been installed in the same spot since 1984 – it will celebrate its 30th anniversary this year – and amazingly, no Big Rampaging Bugs Bunny Statue has tried to chow down on this Big Carrot!!

The Biggest Vegetable in New Zealand was built for a TV commercial for ANZ Bank, and then donated to the town. The area is famed for its farms and carrot production.

It's also not far from another Big Thing To See in New Zealand: the active volcano Mount Ruapehu!

Ohakune's a winter resort town, with quite a lot of accommodations and businesses that cater to vacationers who are in the Manawatu-Wanganui Region for mountain tramping, bushwalking, skiing and other snow sports on the Turoa skifield.

But please, if you happen to bump into Bugs Bunny, do not mention it to him!