How famous is the Biggest Soda in New Zealand? 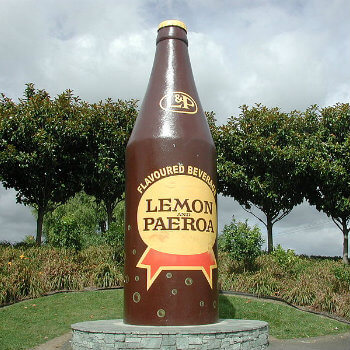 Paeroa, Waikato is the hometown of a wonderful WORLD FAMOUS soda, and has this Big Thing To See in the World as its famous symbol!

In the late 1960's, the New Zealand town had built a Big Rocket Ship, and then a Big L&P Bottle on a busy street.

That bottle was deemed too hazardous to remain there, but in the Summer of 1969, the Paeroa Borough Council and Innes Tartan built a smaller one (about 20 feet, or 6-7 metres tall).

And so, the World's Largest L&P Bottle (seen in pictures here) resides in Paeroa, and has been located at its current site at Ohinemuri Reserve since 2002.

These days it's bottled by Coca-Cola. Over the years, L&P's comical ad slogan "World famous in New Zealand" has become a popular New Zealand saying.

Drive your rental car to the corner of Normanby Road and Te Aroha Road in Paeroa, and snap a few photos with this Big Thing To See in New Zealand!