Tallest Lighthouse in the USA

We Shine a Light onto the Cape Hatteras Light, the Brightest Big Thing in Buxton

Some giant objects are built just to impress people. Some are built to honor the dead, the heroic, or both. Some are just built because we Americans love to break records! This Big Thing To See in North Carolina had an important purpose – to prevent ships in the Atlantic Ocean from running aground in the Diamond Shoals area, which is just offshore at Cape Hatteras! 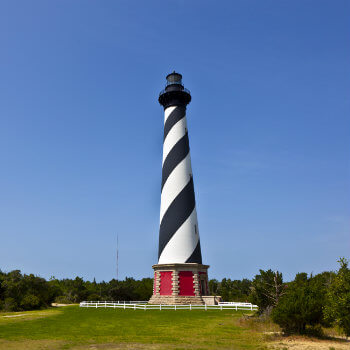 This Big Thing To See is the lighthouse named Cape Hatteras Light. It stands on Hatteras Island in the Outer Banks, the North Carolina coastal islands that separate the ocean from the coast's inlets and sounds.

Once infamous to sailors as the “Graveyard of the Atlantic”, the area was targeted for its need of a lighthouse by the United States Congress, and two were constructed. The first was built in 1802 but wasn't tall or bright enough to be very useful to ships passing in the night, so it was rebuilt in 1870.

The newer Big Lighthouse was constructed by the U.S. Army Corps of Engineers and cost $167,000.

It was built from 1.25 million bricks, and at the time was the tallest brick lighthouse tower in the world. Even today, it's still the tallest such structure in the country.

There are 268 steps to climb in order to reach the light.

Amazingly, in 1999, the Tallest Lighthouse in the USA was moved inland due to erosion, a little more than half a mile. (Can you imagine the knowledge and expertise necessary to move a 5,000 ton tower? We would be too scared to move a 5 pound tower made out of Legos!) International Chimney Corp., from Buffalo, New York, assisted by Expert House Movers, performed the Big Feat!

To visit the Big Lighthouse, just drive your rental car to the Hatteras Island Visitor Center and Museum of the Sea, 46368 Old Lighthouse Road, in Buxton. Staffed by the National Park Service, it teaches visitors of all ages about the history and heritage of the Cape Hatteras Light, and about the natural beauty of the Outer Banks.

The center is open year-round, but the tower is closed in the winter. If you're driving your car rental to the Big Lighthouse, just visit the National Park Service website to find out the dates and times it will be open, when you'll be in the Buxton area!