The World's Largest Sundial in Jaipur has been telling time for almost 300 years! 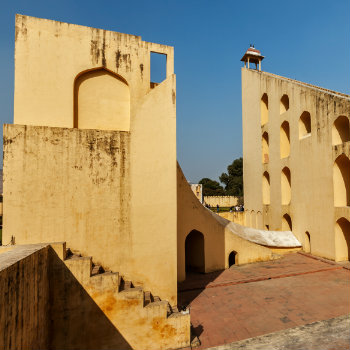 The Samrat Yantra in Jaipur is part of the Jantar Mantar (translation: instruments for calculation), a Big Collection of 14 devices built for measuring time, for astronomy, and for astrology, in the 18th century.

Historical accounts say that, in 1719, Mogul emperor Mohammad Shah was leaving on an expedition. But the planets, weren't in the “right” spots in the night sky. This misalignment due to failed predictions spurred Maharajah Sawai Jai Singh II to build a series of observatories. When Singh decided to move and found a new city (what would be Jaipur) in a nearby valley, he also had a new observatory built there.

The Jaipur observatory in Rajasthan, which contains the Jantar Mantar instruments, is the largest and best preserved of the ancient Big Observatories.

This Big Sundial is 27 meters (90 feet) tall, and is so large that its shadow moves at a speed of 1 millimeter per second. If you stand and watch it, you'll see it move 6 centimeters (about 2 1/3 inches) every minute.

Like the other tools of the Jantar Mantar, the Samrat Yantra is a fixed tool. Its face is angled at 27 degrees, which is the latitude of Jaipur. There is a small cupola on top of it, used in Hindu tradition to announce eclipses and for weather prediction, e.g. the arrival of monsoons.