Cars
RV Rentals
Loading...
Secure a Cheap and Reliable Car Rental in Columbus - Save Time and Money
Download the VroomVroomVroom app and access the best car hire deals wherever you are.

VroomVroomVroom gives you the benefit of checking multiple rates on car rental in Columbus all at once, and being able to choose the type of rental vehicle you're interested in, as you compare. We show you all the car rentals available from Avis, Budget, Enterprise, Hertz and Thrifty in Columbus!

Columbus is the biggest city in the state of Ohio by population, although the overall metropolitan area isn't as populated as Cincinnati or Cleveland. Columbus is also the state capital, and was named after the famous explorer Christopher Columbus. If you need an affordable car rental in Columbus -- or anywhere in Ohio -- book with us because you can save time and money!

Reasons to book a car rental in Columbus with VroomVroomVroom

People book with us every day because we are the experts in car rental. We provide outstanding customer service and numerous other benefits. Book with us because: 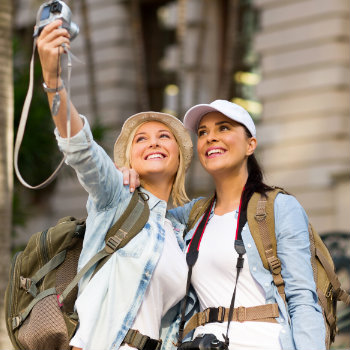 Here are some top attractions within Columbus

Columbus is known for its diversity. This diversity extends not only to the variety of people you will meet in this city but also to the array of architectural styles of the many historical buildings and homes. Here are a few things you shouldn't miss if you visit Columbus.

The Jefferson Center for Learning and the Arts was founded in 1975 and is located in Columbus. When you drive your car rental there, you'll discover that the center is a nonprofit organization, a center for research, and a place where seminars, governance and publications are housed. It was expanded by including the James Thurber childhood residence.

The Main Street Bridge is situated in Columbus and has an interesting arch suspension over the Scioto River. This bridge is the fifth in the world that uses this type of inclined arch structure. It looks amazing, mainly at night when lots of lights turn on. Definitely a sight to see, and your affordable car rental can take you there!

The Greater Columbus Convention Center in downtown Columbus impresses tourists with its unique architectural style. It is very large and houses many exhibitions and also includes 61 meeting rooms and 2 ballrooms. The center is the site of many expositions, so you'll have the opportunity to admire one of them.

The Ohio Statehouse in Columbus, Ohio, represents the house of government of Ohio. You must fire up your car rental and see it! The house features a Greek Revival style and hosts the Ohio General Assembly and the offices of Lieutenant, Governor, Auditor and Treasurer. It underwent many changes and expansions, but today has a wonderful design. This attraction includes many pieces of ornamental art, a huge number of portraits, paintings, and it's also a museum. The residence gives visitors the opportunity to find out more about the area where they are spending their vacation and also about a part of American history!

5 Things You Must Do in Columbus

1. Visit the Columbus Zoo and Aquarium. This world renowned zoo is known for its gorillas, Siberian tigers, manatees, cheetahs and kangaroos.  For more information on the Zoo click on the link.

2. Tour the COSI. This hands-on science museum gives visitors the opportunity to learn about science and industry through interactive exhibits.  For more information on the Museum click on the link.

3. View some fine art at the Columbus Museum of Art. This museum includes early American and European art as well as some contemporary and local pieces. Artists included in the collection consist of Picasso as well as Norman Rockwell.

4. Take a stroll through the Short North Neighborhood. With its many shops, art galleries, pubs and coffee shops you are sure to find something of interest. While in the area, also note the early 20th century architecture as well as the metal arches that span the street in this area. It was these arches that gave the city its nickname “City of Arches.”

5. See the Santa Maria model. This to-scale replica of one of Christopher Columbus's famous ships is docked on the Scioto Riverfront. The ship was added to the area in 1992 to commemorate the 500 year anniversary of the discovery of America.

Other locations near Columbus
Columbus Map