It would take a long time to finish off this impressive Pringle near Pocatello!

The Idaho Potato Museum is the home of this Big Thing To See in the USA, one of the Procter & Gamble company's greatest (and strangest) achievements in the area of snack foods. 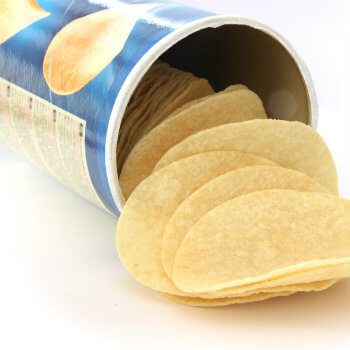 The World's Largest Potato Chip is a Pringles brand chip that was engineered in Jackson, Tennessee, way back in June 1991. This amazing monument to America's love of the greasy, artificially-manufactured snacks -- they used to contain more ACTUAL POTATOES than salt & preservatives -- is 25 inches long and over 14 inches wide, weighs 5.4 ounces (1/3 pound), and has more surface area than the usual family-size pizza!

This Big Pringles Potato Chip is housed in its own display case, and is one of the crown jewels of Idaho's museum dedicated to celebrating the history of the state's #1 vegetable crop.

The Idaho Potato Museum is located in Blackfoot, Idaho, at 130 Northwest Main Street, in the old Oregon Short Line Railroad Depot. It's a 30 minute drive in your rental car North from the City of Pocatello. (Just take Interstate 15 to Exit 89, and follow U.S. Highway 91 about 3.5 miles north to Blackfoot. The museum will be on your right.)

When you park your car rental at the museum, you can usually check out the World's Largest Styrofoam Potato, which is a Giant Display Spud that's sometimes mounted on a truck and taken on tours. And any visit to the 'Tater Museum just isn't complete without snapping your child's or spouse's photo in front of the Mr. Potato Head tribute display! The museum gift shop can hook you up with tasty potato fudge, potato ice cream, or a few potato cookies!

Big Things To See Did You Know... that some believe the nickname for a potato, "spud", came from an English anti-potato group founded in the 19th century? SPUD was the Society for the Prevention of Unwholesome Diets! This story, although a good one, was actually made up by an Italian-American writer in the late 1940s.