Anyone Can Actually Add on to this Big Thing To See! -- Why Not You? 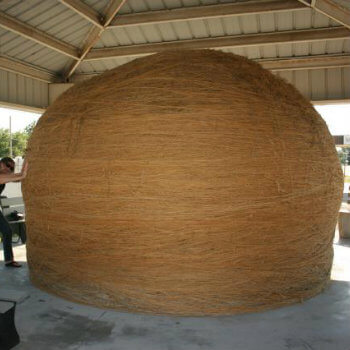 The World's Largest Ball of Twine might sound a little dull, but VroomVroomVroom can honestly say that this Big Thing To See in the USA is awesome for one reason: you can be a part of a world record...

About 60 miles northwest of Salina, Kansas, is the small town of Cawker City. Home to under 500 Americans and one Giant Ball of Twine, Cawker City can be reached by heading north in your rental car from Salina on US Highway 81, then turning west on US Highway 24.

The Big Ball of Twine is located on a sheltered pavilion at 804 Locust Street, Cawker City, KS 67430. There are benches under the shelter where you can just relax and take it all in.

If you stop at the Big Twine Ball, you may be greeted by the town's twine ball caretaker. Ms. Linda Clover will ask you if you want to add to the ball! She often provides twine to people, and writes down how much is added, as the World's Largest Ball of Twine is a hotly competitive record... this ball eclipses others by weighing in at just under 10 tons (as reported in September 2013)!

Local businesses in Cawker City commonly have shop windows that feature the Big Twine Ball. In fact, there is a paint stripe along the sidewalks from the Big Ball of Twine, and if you follow it, you can walk along Main Street and see the window art!

The locals will tell you that, according to town history, the late Frank Stoeber began the Big Twine Ball on Christmas Eve in 1953. Local farmers and their families contributed twine and helped wind it, and 8 years later, the town moved it to the shelter. 60 years later, Cawker City and surrounding communities still add to the World's Largest Ball of Twine at the annual "Twine-athon", which is held the 3rd weekend of every August!