Cars
RV Rentals
Loading...
Compare Deals to Find a Cheap Car Rental in Seattle
Download the VroomVroomVroom app and access the best car hire deals wherever you are.

Compare Deals to Find a Cheap Car Rental in Seattle

Finding a reliable and affordable car rental in Seattle is easy with VroomVroomVroom. We compare rental cars from the country's leading suppliers, including Alamo, Enterprise, and National. You can easily find the vehicle with the lowest price by filtering the results. With so many great pick up and drop off locations to choose from, you will surely find a depot near you.

The city of Seattle is a major United States seaport and the biggest city in the country's Pacific Northwest region. It is built between Lake Washington and Puget Sound on an isthmus that was inhabited by native peoples for over 40 centuries before Indiana-born pioneer Arthur Denny and others settled in the area in 1851. The Pacific Northwest is a beautiful area, and if you visit for business or pleasure, it's highly advisable that you rent a car in Seattle.

Reasons to rent a car in Seattle through VroomVroomVroom

Summer is the most popular time to visit Seattle so make sure to book a flight, accommodation, and rental car ahead of time to avoid the peak season from September to October. If you want to avoid the crowd and higher rates, it is best to visit in early fall and spring. The weather is still quite warm, but make sure to dress appropriately to beat the cool winds. For the ultimate foodie adventure, check out the Seattle Restaurant Week held every April and October.

Regarded as the biggest in the country and the third largest in the world, the Washington State Ferry System carries more than 25 million passengers yearly. Note that Seattle's Pier 52 is regarded as the busiest ferry terminal in the U.S. If you are arriving via Seattle Airport, the cruise ports are just 20 to 30 minutes away by car rental. Before you start touring Seattle in a cheap rental car or RV rental, it is best to check the road situation and see the best way to your destination. Since Seattle is known for being one of the rainiest cities in the USA, we recommend you check out the weather update. It is also advisable to read the basic road rules in the USA for a hassle-free trip.

Seattle's music scene is famous nationwide. Thanks to your car rental, you can spend a fun night out at one of the city's numerous jazz nightclubs. Did you know that Seattle's jazz scene helped the early careers of Ray Charles, Quincy Jones, and many others?

Are you planning a memorable and stress-free trip in Seattle with a car rental? Then this travel guide will take you through the most amazing attractions in Seattle, including the top things to see and do, as well as the best places to eat and stay.

Ride the Ducks of Seattle

Open 362 days a year at Seattle Center, take your rental car and drive to Broad Street in Seattle to Ride the Ducks, a WWII amphibious landing craft. They say you haven't seen Seattle until you've seen it from a Duck. During your 90 minute ride on the Duck, you will be taking a tour on land and water while listening to a coast guard certified maritime captain as he or she narrates interesting historical facts and folklore. This is a great fun for the entire family, truly a party on wheels that floats.

Want to see Seattle from a different view? Drive your rental car to the Kenmore Air Science Flights and take a fun ride! They fly out daily in seaplanes at about 1,000 feet up in the air showing passengers the Space Needle, the downtown waterfront, Green Lake and even more. If you are scared of heights, you can still appreciate the world of aviation by checking out the different airplanes and spacecrafts at the Museum of Flight. They also  have various exhibits including The Boeing Centennial Exhibit.

Seattle is also the birthplace of rock 'n' roll icon Jimi Hendrix, and it's highly recommended that you visit the EMP Museum, founded in 2000 by Microsoft co-founder Paul Allen. Originally intended as a Hendrix museum, it was re-christened “the Experience Music Project” and now features pop music, pop culture and science fiction, too! It's a short drive in your rental car to the EMP building – which itself is a unique sightseeing stop thanks to its amazing architectural design – and it's just a stone's throw away from Seattle's world-famous Space Needle!

Drive your car rental over to the Seattle Waterfront and enjoy a magnificent view! Jump on the old streetcar, visit the wildlife habitat preservation, or have a delicious smoked salmon dinner! 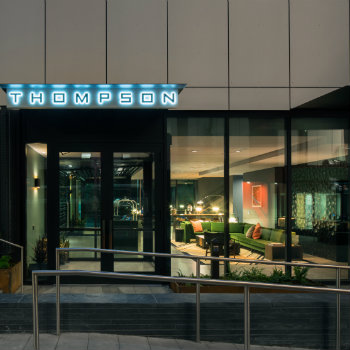 Thompson Seattle
Address: 110 Stewart St, Seattle, WA 98101, USA
Be absolutely remarkable when you make a reservation at Thompson Seattle. Situated in the heart of downtown Seattle just steps away from the city's historic Pike Place Market, Thompson Seattle provides spectacular views of the Puget Sound and Olympic Mountain Range. You can also enjoy nearby Seattle experiences , including the  Olympic Sculpture Par, Benaroya Hall, Seattle Art Museum and the Seattle Center which features the Space Needle,  Aquarium, Chihuly Garden & Glass and Pacific Science Center.
Additionally. this sophisticated hotel boasts some of the most unique event spaces and spectacular views for weddings and social events in the city.  It  features 158 guest rooms, including 8 corner studios and 2 suites, a signature restaurant, a rooftop bar and lounge, and more than 5,000-square feet of indoor and outdoor event space.
Kimpton Alexis Hotel Seattle
Addresss: 1007 1st Ave, Seattle, WA 98104, USA
Located in downtown, the luxurious and pet-friendly Kimpton Alexis Hotel Seattle houses a full-service salon and spa, an on-site fitness wellness facility and private steam room. It is also home to the The Bookstore Bar and Café and  Library Bistro, offering modern American food, Pacific Northwest wines, signature cocktails, as well as a diverse of and one of the biggest single-malt scotch selections in Seattle.

Pike Place Chowder
Address: Pike Place Market, 1530 Post Alley, Seattle, WA 98101, USA
Seattle is also a wonderful place for food and drink lovers. While in the city, why not grab your keys and take your cheap rental car over to Pike Place Chowder? It's one of Seattle's top-rated restaurants, and if you haven't tried chowder, you're missing out!
Bakery Nouveaufo

Or, why not drive your Seattle car rental over to Bakery Nouveaufor the best croissants in Seattle? This bakery and coffee shop has some of the best baked goods in Washington state on its menu!

If you are big a fan of burgers and fries,  you may want to park and order at the parking lot of Dick's and experience their burgers which are made with 100% real beef, delivered fresh and never frozen.