This Big Motorcycle near Green Bay is a Rolling History of Harley-Davidson! 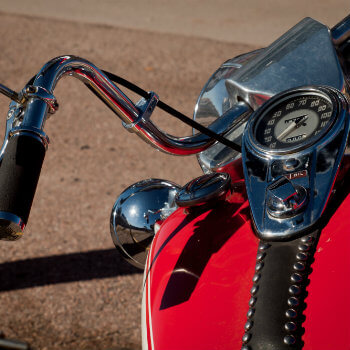 On Wisconsin State Highway 29, about 25 miles northwest of Green Bay and just east of the village of Bonduel, Doc's Harley-Davidson of Shawano County is the area's premier dealership and destination for motorcycle enthusiasts.

And nothing is cooler at Doc's than The Timeline!

The Timeline Motorcycle is one of the most unusual custom bikes we've ever seen, and definitely deserves a place among the most awesome Big Things To See in the USA!

Steve “Doc” Hopkins built the Timeline, a 10-person, seven-engine bike, and has taken it to display at events like the Sturgis Motorcycle Rally and Daytona Beach Bike Week.

Its seven Big Twin engines date from 1909 to present -- including the F-Head IOE used from '09 to '29, the Flathead, the Knucklehead, the Panhead, the Shovelhead, the Evolution, and the modern Twin Cam Fathead. The entire motorcycle is 24 1/2 feet long. And it's fully functional! Head over to YouTube and check out the 5-minute video from a few years ago, with 10 riders taking it out onto Highway 29 and into South Dakota!

Visit Doc's H-D and you can also see the Roadog, built by the late “Wild” Bill Gelbke in the 1970s. It's another Big Monster Motorcycle, measuring over 17 feet long and weighing in at 3,280 pounds!

In fact, Doc's Classic Car & Cycle Museum is probably one of the most awesome Big Attractions in Wisconsin – we recommend it to anyone who gets excited when they hear a Big Engine revving!

Park your car rental outside the H-D shop and enjoy the free museum -- it features muscle cars, memorabilia cars like the General Lee from The Dukes of Hazzard, classic motorcycles, antique gas pumps, and a reassembled Standard gas station from 1938!

Here are just some of the cars featured at Doc's:

Doc's Harley-Davidson of Shawano County, 2709 W. Wisconsin 29, Bonduel, WI, is open 7 days a week and there is no charge to visit the museum!