What is the Burning Man festival?

Back in 1986, Larry Harvey and friend Jerry James banged together an improvised wooden figure, and carted it down to Baker Beach in San Francisco. At the summer solstice they set it alight, while a curious crowd gathered. This was the first Burning Man. 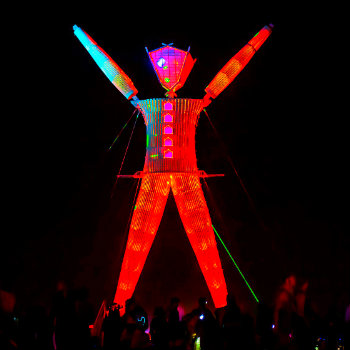 Fast forward 30 years, and Burning Man is an annual festival attended by just under 70,000 devotees. They assemble in the Black Rock desert, Nevada, and create their own temporary metropolis of Black Rock City. The city is complete with infrastructure, even its own airport! The festival celebrates creativity in all its forms. Each year the art is centred on a theme, this year's is Da Vinci's workshop: playing on the Renaissance principles of partronage, artistry and technical innovation.

For many people who attend the festival, the ideal way to meet the principles of radical self-reliance, and leaving no trace, is to rent an RV. Technology in the camper allows self-containment, and at the end of the festival, they can drive off the site. Campers and RV have become so popular at Burning Man that Joe Laing, director of El Monte RV, describes Burning Man as, 'the busiest time of the year.' He says, 'Basically, everything we have west of the Mississippi makes its way to Burning Man. We have a small army of drivers moving vehicles west.' He will rent between 750 -900 RVs for the event.

Leave no trace with an RV rental, leave dollars in your wallet too!

So while the festival promotes ideas on non-commercialism, in the hard-nosed world of RV rental, supply and demand does dictate price. The timeline for the festival means that general sale tickets priced at $390 go on sale on March 23. Now is the time to act if you want to tick this experience off your bucket list. 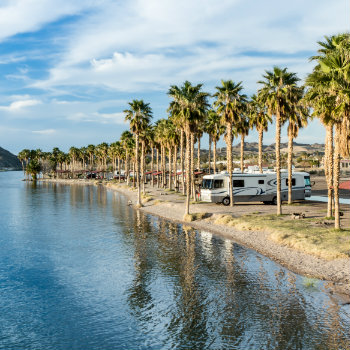 A search of campervan availability on VroomVroomVroom's RV pages is enlightening. As at the end of February, there are vans available from a range of suppliers. The most convenient pick up and drop off point for wanna-be Burners is likely to be Reno, Nevada. It's a comfortable six hour drive from there to Black Rock City. Prices for this hire, from the Friday before the start of the festival, 26th August to the day after the festival, the 6th of September start at an eye-watering $8276.40.

Contrast that with main centres further from Black Rock, and you will see a serious increase in value. For VroomVroomVroom customers flying to the States from Australia or New Zealand specifically for the event, the main gateway cities of Los Angeles or San Francisco are sensible choices, allowing you to extend your road trip. From LAX or SFO, a 4-berth camper can be rented for those same dates for $2591. The drive from LA to Black Rock city is around 15 hours. From San Francisco, you can plan for between 10 and 14 hours, depending on the route. So you can see, that by adding one more day's driving to each side of your trip, you get a radical price difference, and the chance to see more of the scenery on your way there and back.

There's a couple of other possibilities in the same driving time frame, but offering quite different experiences. Consider starting from Portland, Oregon; famous for boutique coffee roasting and micro-brewing. It's 10-11 hours driving, with a price of $2855 for a 4-berth camper. Or there's Salt Lake City, Utah: 12 -16 hour trip, $2898 rental.

VroomVroomVroom has depots in all these places. Prices quoted are from our website on the 22nd of February 2016, but are shown as an indication only, and are subject to change. Remember, the sooner you book, the better the deals! Not ready for this year? No worries, keep researching all you need to know at the official website burningman.org.