You won't want to "Temple Run"! One of India's most breathtaking temples is in Bangalore.

The Big Thing To See in Bangalore has to be the Bull Temple! Known locally as Dodda Ganeshana Gudi, this temple is located at the Basavanagudi area of the city. 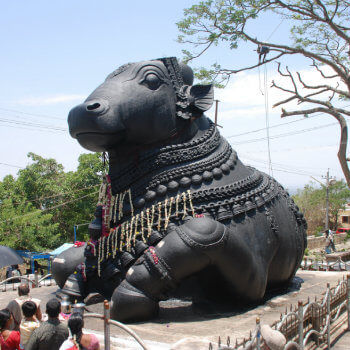 It was built by order of Kempe Gowda (1510-1569), who was a feudal ruler during the Vijayanagara Empire and the founder of Bangalore. Today, of course, Bangalore is the capital city of the Indian state of Karnataka.

The Bull Temple's 16th century architecture is of the Dravidian style. Dravidian architecture dates back thousands of years in the Southern part of the Indian subcontinent, and was built by the Tamil people.

This Huge Temple in India features a Gargantuan Granite Monolith of Nandi, the white bull on which Shiva rides.

If you want to visit this Giant Nandi, just drive your rental car over to Bull Temple Road, Basavanagudi Bangalore, KA.

While there, be sure to also enjoy the Bugle Rock garden, which is next to the Bull Temple.

The garden's name originates from a very large rock formation, and the buglers who once stood atop it to alert nearby citizens whenever necessary.

It's a beautiful, tree-covered garden that is home to numerous bats. There's also a motif-covered water tank, honoring famous people of Karnataka.